If you paint it, they will come … to Pageland 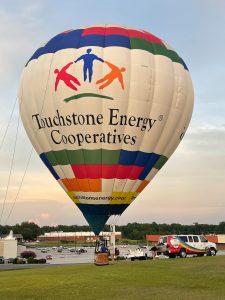 Though the festival officially began Thursday, our weekend festivities began with the ‘Greetings from Pageland’ mural dedication where we recognized and celebrated the completion of the joint project between Lynches River Electric, Touchstone Energy, the Hometown Team, the Town of Pageland, and the Pageland Chamber of Commerce.

“We follow seven cooperative principles and one of those is concern for community,”
said Brian Broughton, President and CEO of Lynches River during the mural dedication. “We truly care for our community and we will always be a partner with the Town of Pageland.”

After touring the town, meeting the locals, and enjoying some of the festival offerings the Hometown Team, which included Jim and Mallorie Rasberry, Josh Nowell and mural artist Will Sellers, returned early Saturday morning to serve as the Grand Marshals for the Annual Watermelon Festival Parade.

“Pageland is a vibrant community, but most importantly has people who care and have pride in the town,” said Jim Rasberry. “Those components make everything else possible. The key to everything that comes next for your town is having people that care.”

Despite being grounded for much of the weekend due to the threat of storms, the Touchstone Energy hot-air balloon drew many admirers just outside the festival grounds and was the talk of the town during its brief flyover.

As the festival drew to a close, many took time to reflect on the journey of the past 18 months that culminated in one amazing celebration of the town that Lynches River is proud to call home.

“This isn’t the end for the revitalization of Pageland. This is just the beginning,” said David Sides, LREC’s VP of Marketing and Economic Development. “I challenge each of you to get involved because when we all give a little, it leads to a big impact.”

We need your phone number